What is a king without a castle? Over the centuries, the political fragmentation of Italy led cities, kings and lords to build many castles and fortified villas in those places that ora today regarded as some of the most beautiful of the whole peninsula. From Piedmont, through Tuscany, down to Umbria, let's discover four beautiful castles which would allow you to relive the Middle Ages but with all the modern comforts available. Maybe you'll find your dream property and become the "king" of your personal domain in Italy.

The fortress, built to defend Siena (and the city is well visible from the towers), takes its name from the four imposing towers which make it stand out in the countryside. Part of the history of the city since its construction in the Middle Ages, the fortress served as an invaluable defensive point up until the mid-16th century when the ultimate fall of Siena against Florence put an end to all wars in Tuscany and many fortresses and castles lost their usual purpose.

DISCOVER OUR PROPERTIES FOR SALE IN SIENA

The building was finely restored and became a luxury private countryside residence which, generation after generation, ended up in the hands of the current owners. Nowadays, the castle houses a cozy B&B with three apartments for the guests and the owners' private residence on the upper floors. The 17.0 hectares of land surrounding the castle house a Chianti Colli Senesi DOCG vineyard which is currently rented out to a winemaker which pays its rent with an agreed quantity of wine each year.

Not far from Siena, on top of a hill overlooking the surrounding countryside, this imposing castle shows the signs of the many demolitions and reconstructions. Its destruction was first ordered by Barbarossa but the decree was ignored alltogether. Otto IV of Germany managed to have the castle partially demolished and the building was probably halved. The castle shows a semiciricular plan and the wall enclosing the garden is probably what remains of the demolished half of the castle, which probably had originally an elliptical plan.

DISCOVER OUR PROPERTIES FOR SALE IN SIENA

Damaged through the many fights between Florence and Siena, the castle was first restored in the 17th century and became a beautiful countryside villa: the building is still today a private residence with 6 bedrooms and imposing halls which seem to bring us back to the Middle Ages. Almost 100 hectares of land surround the castle and grant unrivaled privacy. 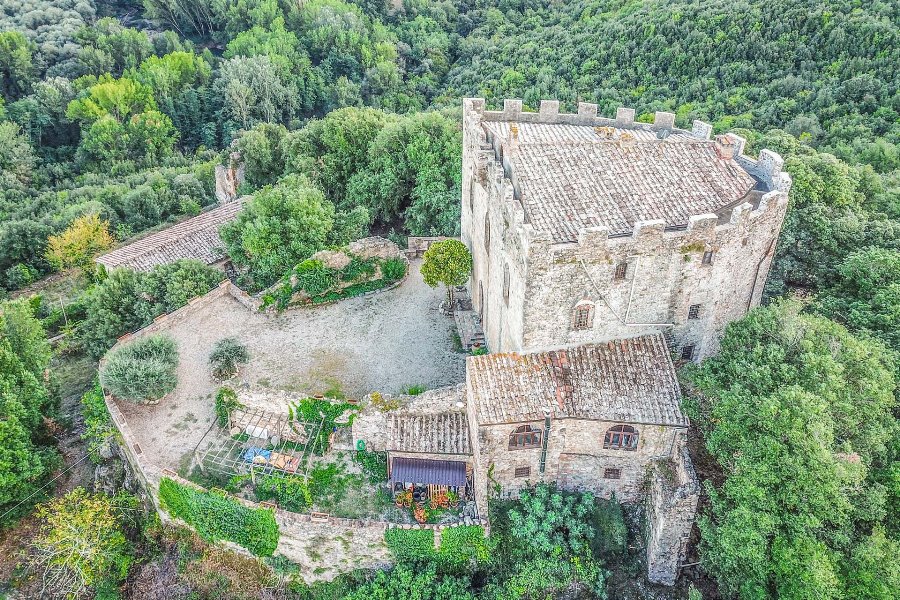 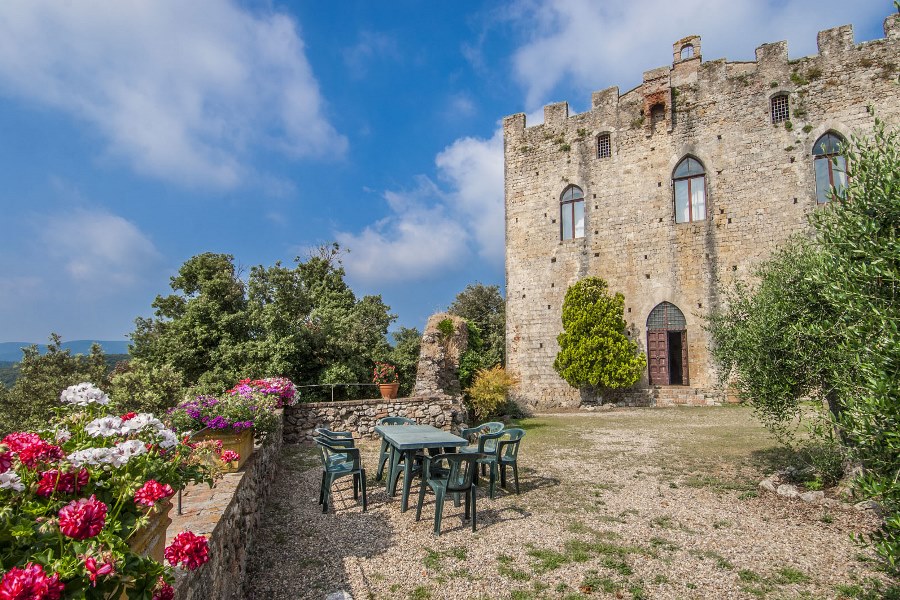 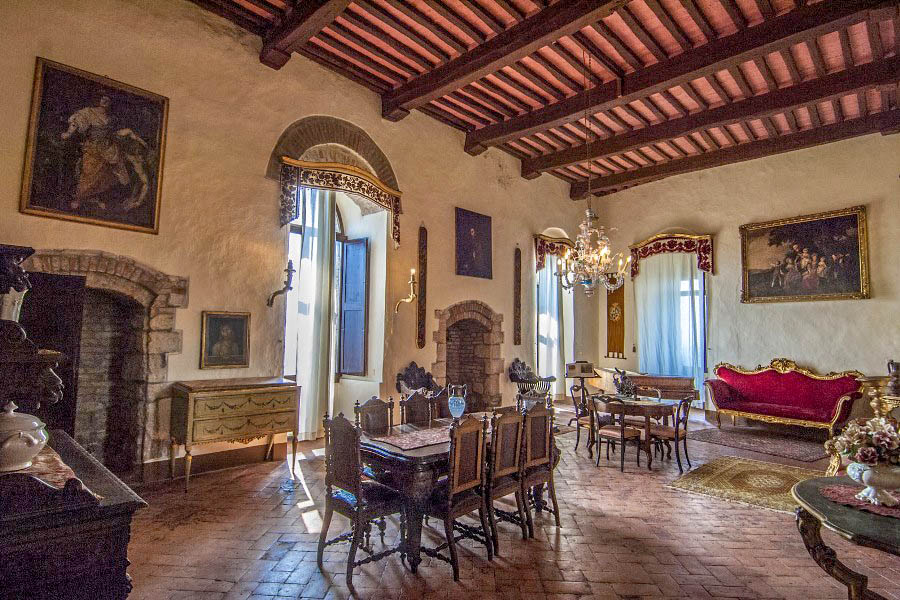 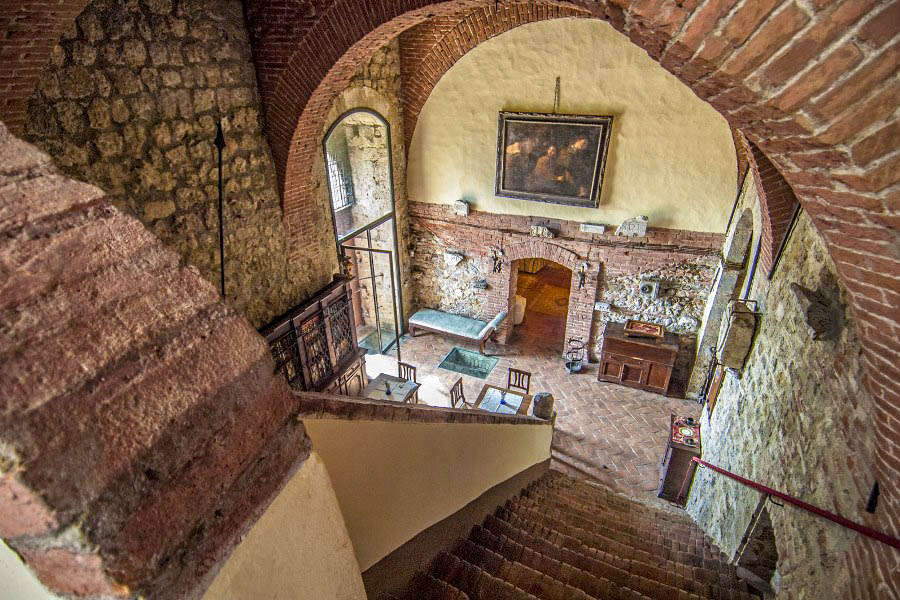 Built by the Normans over the remains of a destroyed Byzantine keep, the castle is nestled on top of a hills and dominates the surrounding countryside, with a view spanning towards the Oasi di Albiano. The building as we can admire it today follows Antonio da Sangallo's design of a quadrangular keep around a central courtyard. The only portion missing from the castle is the main tower emperor Charles V had demolished to make the fortress inoffensive while its army moved towards Florence in the 16th century.

DISCOVER OUR PROPERTIES FOR SALE IN UMBRIA

The property, which also includes several other stone buildings inside the hamlet surrounded by ramparts, has been carefull restored to preserve its ancient look, among which a beautiful vaulted room made entirely out of stone which was back then used to appoint knights. The castle, with the other buildings included, is currently a private residence (occasionally used for meetings and conferences) but would be the perfect starting point for a beautiful boutique hotel. 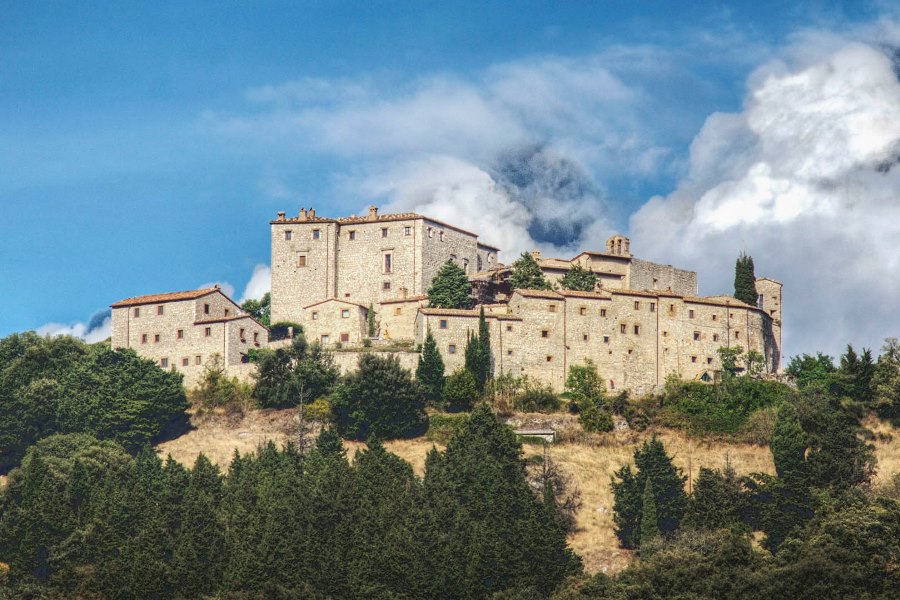 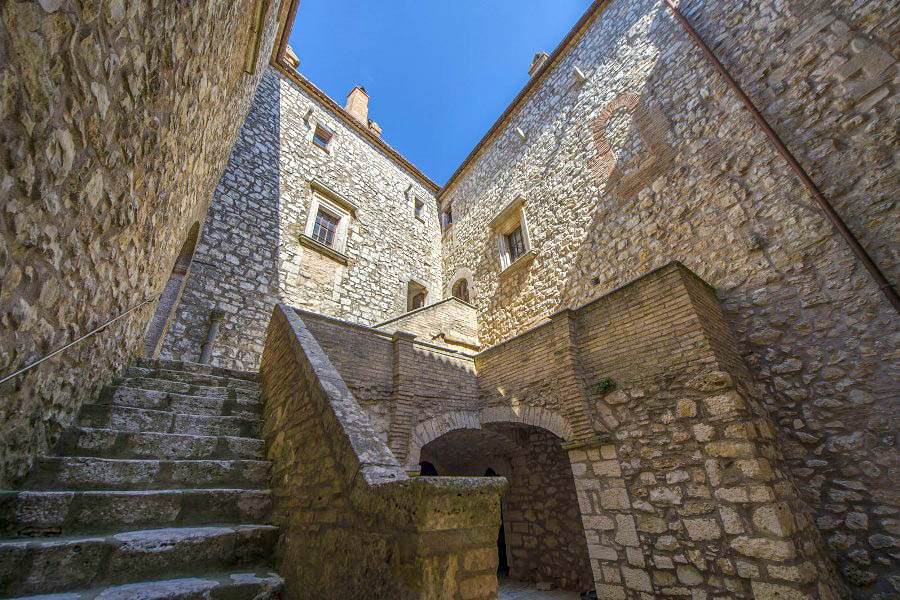 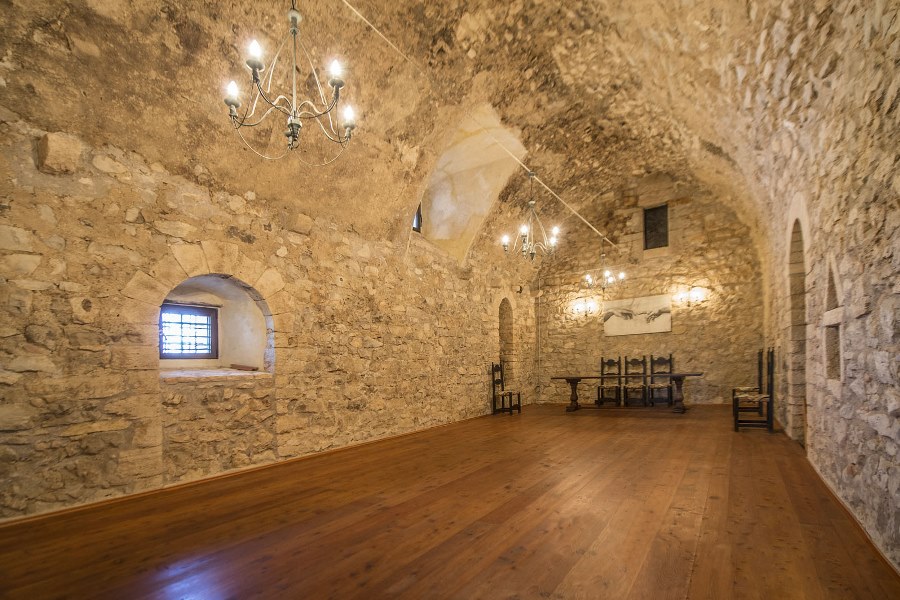 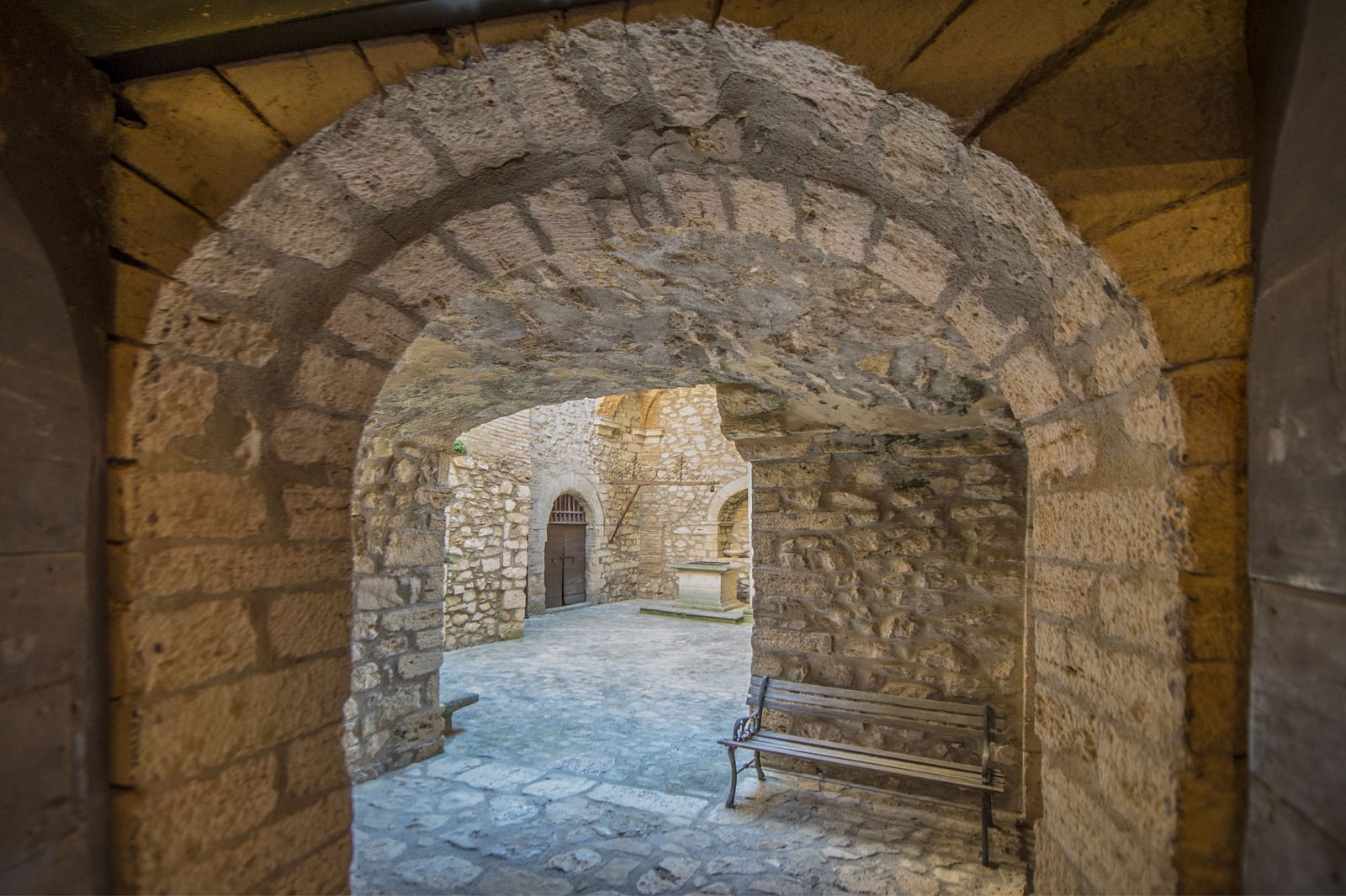 Located at the top of a beautiful medieval town of Montferrat, this castle is the result of the union of several pre-esisting building into a single construction. The original building, dating back to the 12th century, is no more but its remains are still visible around the gardens and allow tracing the original shape of the castle, similar to a horseshoe. In its place there is today the main portion of the new castle which, over the centuries, ended up incorporating sevral other buildings until it reached the current imposing size.

DISCOVER OUR PROPERTIES FOR SALE IN MONFERRATO

Of the demolished portion one can still see the huge underground rooms, where prisons, water cisterns and storage rooms were probably located. A short distance from the castle itself there is a beautiful medieval chapel where one can admire an unfortunately damaged 14th-century fresco (covered in the 17th century and only brought back to light in the 1930s). The complex would be perfect for the creation of a boutique hotel and recent works allowed creating further rooms which will be added to the 23 bedrooms located in the main portion of the castle. 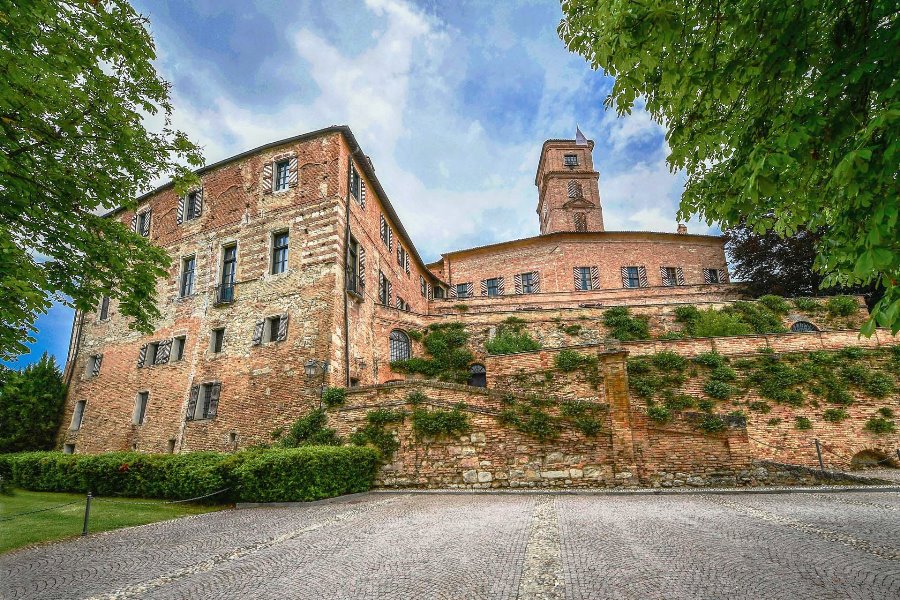 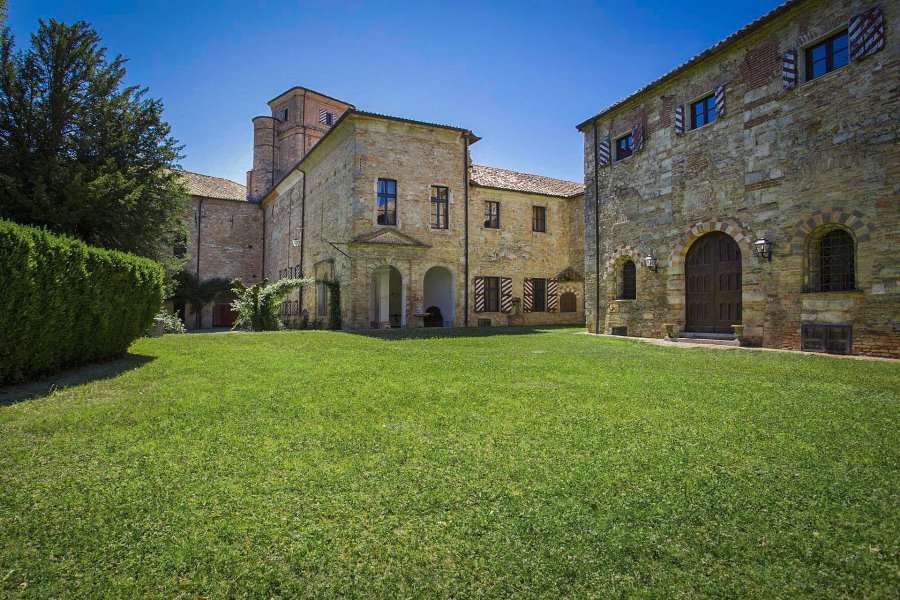 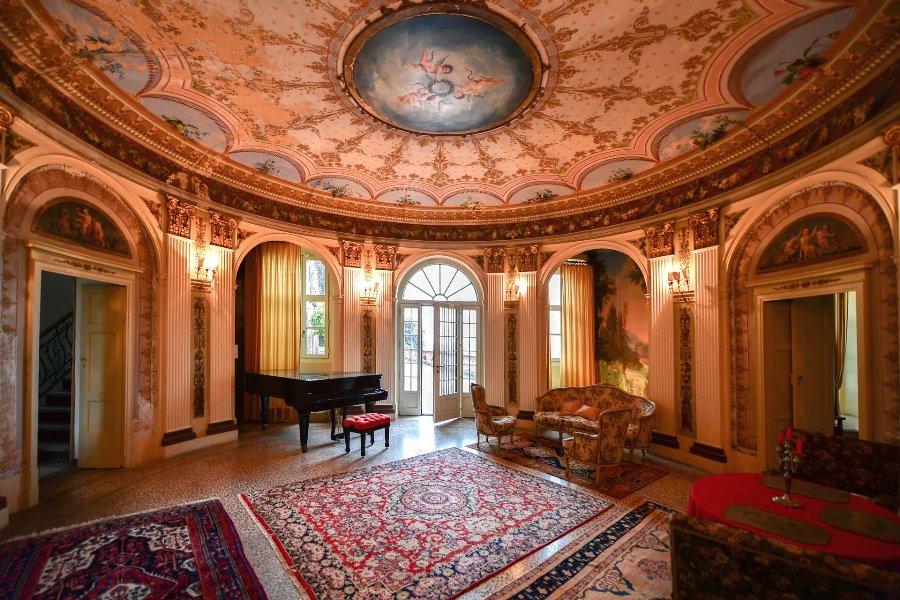 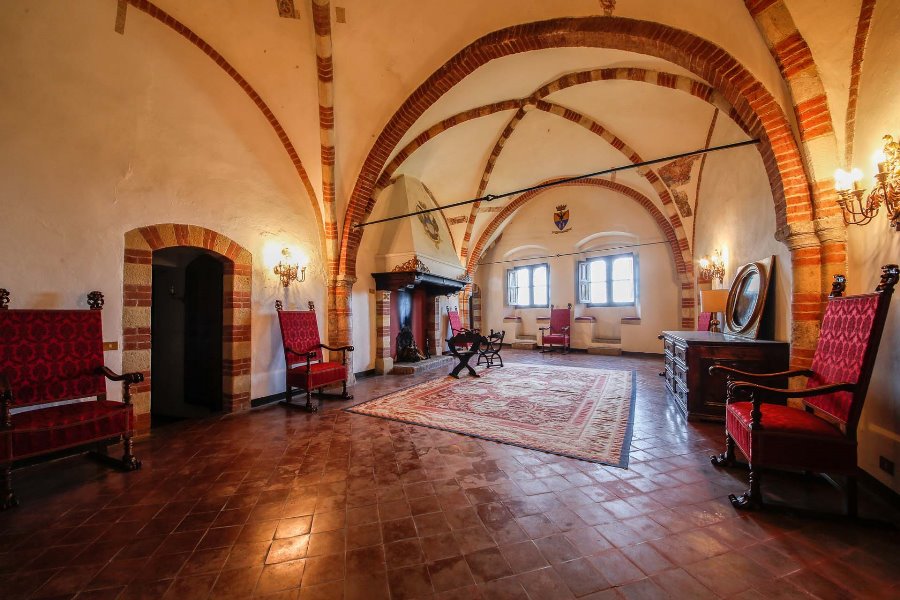 DISCOVER OUR SELECTION OF CASTLES FOR SALE

BACK TO THE BLOG & NEWS SECTION

© 2020 AGENZIA ROMOLINI IMMOBILIARE SRL - Все права защищены
It is strictly forbidden to reproduce, either completely or partially, and re-elaborate any content found on this page.